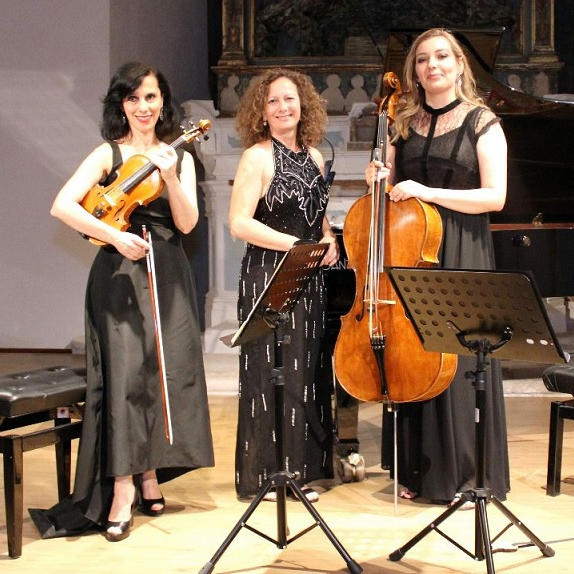 “Nuovo Trio Parsifal” was founded in 2001 and is made up by Patrizia De Carlo (violin), Emilia Slugocka (cello) ed Anna Paola Milea (piano).

The repertoire of “Nuovo Trio Parsifal” ranges from classic music to contemporary music. They is performing in Italy and abroad. In 2003 Trio held a concert at Istituto Italiano di cultura in Bucarest and a tour in Peru and Colombia. In 2004 they performed at Gedung Kesenian Theater in Jakarta (Indonesia) invited by Istituto Italiano di Cultura for the “VII International Festival”. In 2017 they got the Silver Medal – Outstanding Achievement at Global Music Awards.

Emilia Slugocka was born in Duszniki Zdroj (Poland). In 2001 she gained her high school music diploma with top marks. In 2006 she received her II° level laureate with top votes and began her career as a cello teacher at the Music Lyceum in Legnica. In 2008 she won a place as cellist in the orchestra of the Breslavia Opera Theatre. She continued her studies and in 2012 graduated after a three-year professional course at the Santa Cecilia Music Academy in Rome, under the direction of del M° F. Strano and M° G. Sollima. At the same time she participated in a chamber music course at the same Academy under the direction M° Rocco Filippini. She works with many orchestras among with the The Orchestra of the Santa Cecilia Conservatory in Rome.

Anna Paola Milea was born in Reggio Calabria. She graduated at the Conservatory “F. Cilea” in Reggio Calabria under the guide of master Sonja Pahor. She was awarded in several national and international musical competitions. She has attended specializations courses held by Bruno and Franco Mezzena in Riva del Garda, by Carlo Bruno in Porto Torres, by Sonja Pahor in Scala Torregrotta and in Ilirska Bistrica (Slovenia), and by Donella D’Alessio in Sabaudia. She is part of the Sinthorchestra of Rome. In 2003 she was invited by the Association Dante Alighieri from Moscow to play two concerts in the Russian capital, in duo with the clarinetist Giampietro Giumento.