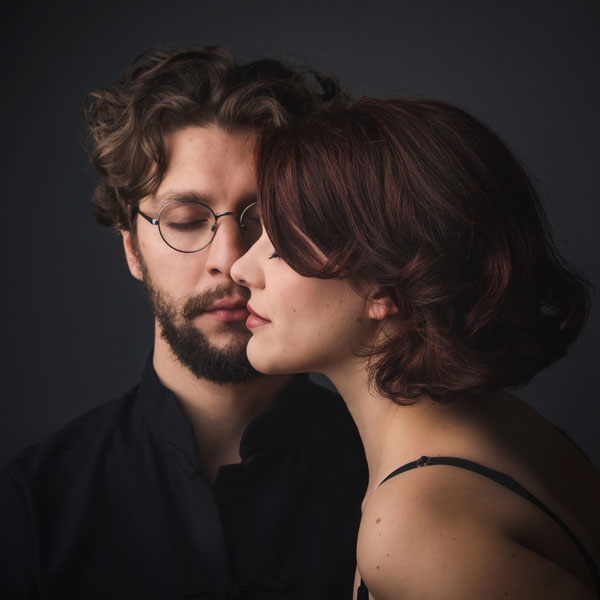 The Duo Camponovo-Blessano – Vansìsiem Lied Duo, formed by Paola Camponovo and Alfredo Blessano, is one of the most promising young ensembles in the field of vocal chamber music in Italy and specializes in the performance of the Italian, French and German repertoire between the nineteenth and Twentieth century. Particularly important is the Duo’s activity in the dissemination of the work of the composers of the ‘Eighties generation’.

The Duo is currently studying at the Conservatory of Florence with Leonardo De Lisi and Anna Toccafondi, where he attends the two-year course in Vocal Chamber Music. In 2017 he participated in the 8th Deutsche Liedakademie of the Hochschule für Musik in Trossingen, while in 2018 and 2019 he attended the Académie F. Poulenc in Tours. He has perfected in recent years with Helmut Deutsch, François Le Roux, Jeff Cohen, Christian Ivaldi, Leonardo De Lisi, Ulrich Eisenlohr, Anne Le Bozec, Julius Drake, Ingrid Perruche, Burkhard Kehring, Erik Battaglia, Gerda Hartman.

Paola Camponovo and Alfredo Blessano have performed, in duo or as soloists, at the Teatro Sociale di Como, at the Teatro Nuovo Giovanni da Udine, at the Palazzina Liberty in Milan, at the Roman Philharmonic Academy, at the Opéra Bastille in Paris, at the Gallerie d Italy in Milan, at the Philharmonic Theater in Verona, at the Ariosto Theater in Reggio Emilia, at the Verdi Hall of the Milan Conservatory, at the Rossini Theater in Gioia del Colle, at the Teatro dei Filodrammatici in Milan, at the Tadini Academy in Lovere, at the Auditorium of the State University of Milan, at the Teatro San Giorgio in Udine, at the Teatro Nuovo in Milan, at the Lyric Theater in Magenta, at Villa Carlotta in Tremezzina, at the castle of Chaumont-sur-Loire, at the Chapelle Saint Libert in Tours, at the Historisches Ratssaal by Speyer … In 2018 the Duo performed in world premiere at the Teatro Nuovo Giovanni da Udine the piece Albatros by the Spanish composer O. Prados, winning piece of the 5th International Composition Competition A. Smareglia. He has collaborated with important institutions such as the ERT FVG – Regional Theatrical Body of Friuli Venezia Giulia, the Vicino / Lontano Festival – T. Terzani Award, the Summer of Winter Festival in Portogruaro, the Liederìadi Festival and the Milan Music Evenings. , AsLiCo, the A. Ricci Academy of Piano Studies in Udine, the Academy of the Teatro alla Scala, the magazine «Amadeus» … In collaboration with the latter, they published their first album in August 2019.

Paola Camponovo graduated in opera singing at the Milan Conservatory. You then perfected the operatic repertoire with Marco Berti, Domenico Colaianni, Andrea Concetti and Tiziana Fabbricini, and subsequently the chamber vocalism with Valentina Valente and Leonardo De Lisi. At the University of Milan, she obtained master’s degrees in History and Criticism of Art and in Musicology, and subsequently a PhD in Musicology. In January 2013 she was the winner of the famous international competition AsLiCo in Como. In 2018 she won the prize for vocal chamber music at the Maliponte International Opera Competition in Milan.

Alfredo Blessano studied piano first in Trieste with Nino Gardi and then at the Milan Conservatory with Vincenzo Balzani: after graduating with honors he obtained, again with honors, the two-year specialization in piano. As a soloist in recent years he has obtained prizes and awards in numerous national and international competitions (Cortemilia, Tortona, Varallo, Piombino, Gussago, Madesimo, Lamporecchio, Asti, Piove di Sacco, Milan-Green Harpsichord). In 2018 he performed the opera La cathédrale d’Ani by the Belgian composer Jean-Pierre Deleuze for the first time in Italy at the Teatro Nuovo Giovanni da Udine. He studied with Nino Gardi, Giorgio Lovato, Maria Teresa Carunchio, Giovanna Valente, Leonel Morales, Steven Spooner, Roberto Plano, Rolf Plagge, Roberto Prosseda, Aleksandar Madzar, Giovanni Bellucci, Maurizio Baglini, Daniel Rivera, Gabriel Tacchino. He is currently attending the master’s degree course in Music and Entertainment Sciences at the University of Milan. In 2015 he collaborated with the Academy and the Children’s Choir of the Teatro alla Scala. In 2018-2019 he accompanied, as a fellow, the viola, flute and percussion classes of the Florence Conservatory.