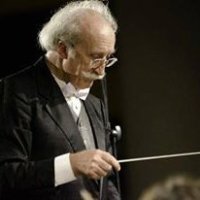 Nicola Samale was born in Castelnuovo d’Istria and began his musical studies at the “S. Cecilia ” in Rome, graduating in flute, composition, instrumentation for band and orchestra conducting.

He began his conducting career with the victory at the AIDEM Competition in Florence in 1968, the second prize at the “G. Cantelli “in Milan in 1969 and the first overall prize in the context of the “Giovani Direttori Italiani” of RAI in 1970.

As a composer, Nicola Samale has distinguished himself in a very particular field, the reconstruction of great unfinished masterpieces of the symphonic repertoire.