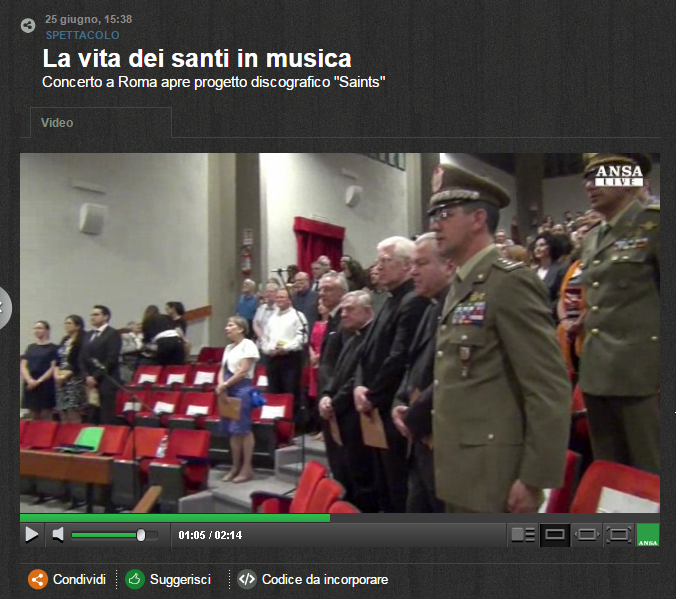 ROME – Telling the lives of the Saints through the music to reach people’s soul: that is how the concert dedicated to St. Francis, performed by the Italian Army Band at the Auditorium Seraphicum of Rome, started the project Saints, promoted by the record label BAM Beyond Any Music and realized under the patronage of the Pontifical Institute of Culture. The project involves the release of twenty music CDs, each dedicated to the life of a Saint, with pieces composed for the occasion by internationally renowned artists. “The initiative comes following a meeting with Benedict XVI in 2015, in which he explained of understanding music as an inclined plane to the divine,” said Daniele Maggiore, BAM’s artistic director.

The concert in honor of St. Francis was attended by Msgr. Carlos Azvedo, delegate of the Pontifical Council for Culture, the commander of the Italian Army Band Col. Giuseppe Bongiovanni and the deputy commander of the military command in the Capital Gen. Francesco Diella, who claimed that the Saints are an important reference for the Italian Army, because it pursues the same goals of peace and solidarity: “The beauty of this project is not only to refer to the lives of the Saints, who are always moral references beyond any religion, but to see it carried out by a Band of an armed force, which is not a paradox, because the Army, in particular, seek to achieve the same goals of peace and solidarity. “

Msgr. Carlos Azvedo recalled that “music is always a way to universalize the feelings, it is capable of harmonizing the hearts, to build a world where peace is possible.”