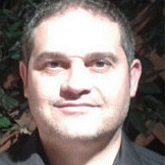 He graduated in Basso Tuba, and he also graduated in Instrumentation and Orchestration for Band at Conservatorio of Cosenza under the guidance of Angelo De Paola. He participated in several courses with N. Gullì, F. Creux, T. Briccetti, D. Carnevali. As an instrumentalist he collaborated with numerous professional ensembles and since 2004 he has an orchestral role at the Italian Army Band. He published “Metodo per basso tuba”. As well as an author, he is dedicated to the recovery of Italian music for the band of the past.