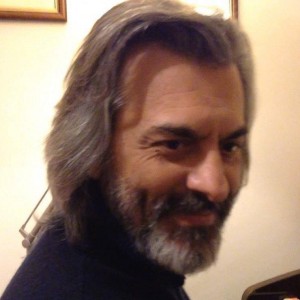 Enrico Vallone (1963) is a pianist and composer.

He studied in the Florentine school of Lucia Passaglia, and graduated in piano at the “Luigi Cherubini” Conservatory in Florence with full marks. He continued his studies in Italy with M.Marvulli, B. Mezzena and S. Fiorentino and in Paris with Yvonne Lefébure. In addition, he studied composition and musical analysis with Fulvio Delli Pizzi.

He has won several first prizes and recognition in national (Osimo, Catanzaro e Pescara) and international (“F. Liszt” in Lucca, European Musical Competition in Moncalieri, International Biennial of Pescara) competitions and is renowned as an interpreter of the romatic repertoire, in particular of Frédéric Chopin.

He is invited regularly to hold recitals and conferences for various concert and cultural organizations in Italy and abroad.

As well as performing, he is a composer: many of his works were recorded and broadcast by RAI Radio 2 and have been performed in renowned concert societies in Italy and abroad.
He currently teaches “Performing and Interpreting music on the piano” at Liceo Musicale “Misticoni-Bellisario” in Pescara.
In 2006 he recorded his first live CD dedicated to the music of Chopin.

In 2011 he recorded a CD of his original piano compositions entitled MAYA.
Since December 2014, his art is edited by the publisher BAM – Beyond Any Music.